The dual n back brain exercise designed by Martin Buschkuehl and Suzanne Jaeggi builds upon many years of research into whether it was possible to train one brain function (such as working memory) and influence another (in this case, fluid intelligence or problem-solving ability). In 2007, Graeme Halford (Emeritus Professor of Psychology at the University of Queensland) took a step toward the answer when he suggested that fluid intelligence and working memory make similar and related demands on the brain's processing capacity. 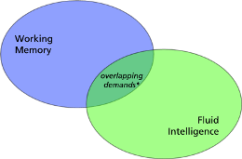 Susanne Jaeggi and Martin Buschkuehl posited that training working memory might lead to increased fluid intelligence5 (essentially an IQ increase) by reducing the working memory demands being placed on the brain's processing capacity. In a groundbreaking experiment, they adapted the n back training they had used in prior studies into a dual n back exercise by combining two kinds of stimuli (visual and aural), and by making it adapt progressively to the trainee's performance -- dual n back training was born.

Jaeggi and Buschkuehl's dual n back study recorded increases in fluid intelligence for all participants (graduate students) of more than 40% in comparison to a control group who did not participate in the training. (The researchers calculated fluid intelligence as the number of correct answers given to a standard set of IQ test questions6 in a constrained time period.)

The more we train our brains with working memory exercise the larger it grows both physically and in the number of neural connections.1 Researchers at Sweden's prestigious Karolinska Institutet, a European medical university, have demonstrated that intensive training of working memory produces measurable changes in the brain,2 direct evidence of brain plasticity.

Related studies show that working memory is not limited to six or seven items as thought previously thought.3 Karolinska Institutet researchers4 have found that a period of brain training with MindSparke's training improves working memory as indicated by the pink dotted line on the chart above. 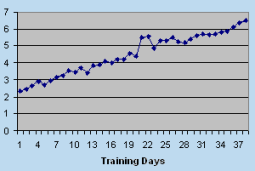 In 2011, the brain fitness researchers (Suzanne Jaeggi and Martin Buschkuehl) who conducted the original 2008 study demonstrating IQ increases from the training followed up with a study on the long term impact of n-back training in children. Published in the Proceedings of the National Academy of Sciences this research shows that intensive working memory training will increase IQ long term.

Trainees have found that improvements in attention, working memory, fluid intelligence, and general cognition continue even after an extended break in training. And that continued training leads to continued improvement.

Stage: 3 Session number: 1 Average n-back: 2.2 Wow this one is really hard…I hope I can make progress! When n=3, it’s almost impossible to keep 3 squares and 3 letters in my head at the same time while rotating them each step… MindSparke Working Memory Training This post was submitted by masud.

The brain fitness researchers Suzanne Jaeggi and Martin Buschkuehl who first demonstrated cognitive gains from n-back training back in 2008 have now published follow up research showing that the gains hold long term.

Dual N Back Double-Session Training – Shaking Off The Rust

After a break of about a month I’m now three days into my renewed double-session training. Despite the time commitment I’m again finding this approach quite rewarding. I feel as though it’s already given me a needed boost in focus and follow-through. (I’ve completed several tasks in the last couple of days that had been [...]

Well, I continue to be pleasantly perplexed by the progress I’ve made since I started training with a combination of dual n-back and “nines”. After a new dual n-back high on Friday of 10.9, today I reached 11.3, staying at n=13 for several rounds. “Nines” score today was 10.1.

A few days ago i broke through the n = 6 barrier with a average n back score of 6.05. The thing that still fascinates me about this is that I’m still seeing slow continuous improvement in my scores. It hasn’t been easy or rapid but steady and pretty continuous. I have felt and seen [...]

Session number: 19 Average n: 2.6 I’m finally done with the 19 session!!!! I feel great! This post was submitted by Ronnette.

I had a request through e-mail for tips on mastering n=5. I thought this would be a good subject for a post. Please chip in if you have other thoughts… n=5 seems to be a pivotal n-back level. For most people on the blog 5 seems to be the largest single chunk that we can [...]